Design a site like this with WordPress.com
Get started
Skip to content
Izabella Zadra Movie Reviews, Reviews July 8, 2020 4 Minutes

This is a very very special blog post today….this is my 100th post on my blog!!! I am still very small and hope to someday get way bigger but 100 is the first big step so I want to thank everyone who has been a follower from the start, everyone who is NOW a follower and all the future followers and people who support my writing and simply like to hear what I have to say. I started this blog about 3 years ago and would have never thought that I would be where I am at with it now in the year 2020 when the world is dead ass on fire.I have lots of big plans for this blog and you all stick around to see it. So thank you once again for everything weather you are a hardcore Anything and Everything fan or this is the first post you have read. Without further ado, because this is a very special post, I have saved a very special movie to review for you guys; the classic film Troll 2. 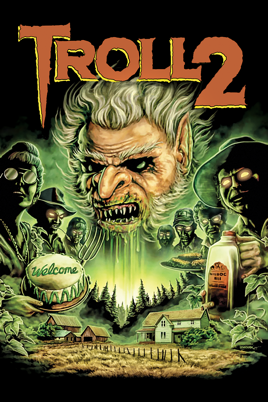 There is a very exciting category of movies that I hold dear to my heart and those are the ‘Good, bad movies.’ There are so many out there that live up to that name but out of all of them, Troll 2 is obviously the most superior, and here is why!

Many people love The Room which is known as being the best bad movie but personally, for good bad movies, I think Troll 2 kicks The Room’s ass!

Now talking about Troll 2, this movie has a really interesting plot and so many random ideas that I wanted to keep watching. This movie is just so….complex I guess you can say that I think we need to pick it apart the two most important pieces of what makes it a bad movie.

The plot of this gift is that a little boy named Josh and his family have signed up for this farmer exchange program (yes very midwestern of them) and are being sent to a place called Nilbog. Before they leave for this trip though, Josh keeps speaking to his grandpa Seth who tells him all these stories about Goblins and how evil they are….but grandpa Seth has been dead for a few years.

RED FLAG #1: Josh is talking to dead people. His doctor basically just told him to forget his grandpa was ever alive and just push his emotions down.

RED FLAG #2: The name of the movie is Troll 2.…and there is not a single troll in the whole movie….just goblins.

Once they get to the town of Nilbog, things start to get weird and Josh is still being visited by grandpa Seth who is telling him to get his family out of there right now before they got eaten by goblins!

Um….these people could not even make like real sentences. Like, I am pretty sure the dad was a freaking dentist and they gave him the script and told him to run with it.

I don’t think these people even knew what real words were at some times! The greatest character when it came to acting was Boy #3 (he was out camping in Nilbog with his buddy who happened to be Josh’s sister’s boyfriend).

All of his screen time is him running and getting all sweaty and he starts sweating like this gross ass green shit and it is just a lot. He is a full-on drama queen!

But he is huffing and puffing and then he gets to the general store and as he huffs and puffs he just yells, “MILK” and the guy looks at him weirdly. Then he yells “EGGS” like he can’t even form a full sentence!! As someone who works at a restaurant, I would not be having it if you just came in screaming different foods at me!

This is how every actor was….and if you don’t believe me, here is a small clip of another classic character, Boy #2 putting on his best-acting face and doing the best scene of the movie.

Those are the two most important parts but there were also so many crazy components that make this movie so great!

There is a whole scene where the witch who controls all these goblins tries to seduce one of the boys (1-3, I don’t remember which) and they end up having like really sensually implied sex in the camper and like, the witch has a cob of corn they are both eating and it is just too much at this point in the movie.

There is another shot where the boys are all chilling in the camper watching a movie. This movie looks 1000% better than the movie at hand; it is a guy in like a monkey outfit shooting into Outerspace….so if any of you can get your hands on THAT movie please call me!

There were just so many random concepts that seemed like they were tied in last minute but somehow ended up working in favor of the plot, they were just bat shit crazy!!!

Overall, this movie was bad but entertaining! I was laughing at how bad it was but there was never a dull moment with the plot either were as The Room to me was just kinda boring. Like even though it was all over the place and there were a ton of unneeded odd scenes, I think the plot was good enough to keep the movie watchable. On a normal movie scale, this would get a 1/5 but on the good bad movie scale, it has a 5/5 rating for me! Out of all the horrible movies I have seen this one is by far my favorite because I can actually follow along and be intrigued by what is happening in each shot.