Design a site like this with WordPress.com
Get started
Skip to content
Izabella Zadra Music Reviews, Reviews June 29, 2020 3 Minutes 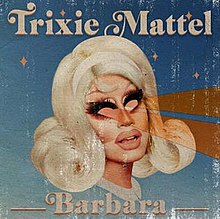 As I explore the new luxury of Spotify Premium student, I realized that I can now listen to albums all the way through on my phone and jumped right into this gem! I did not realize how old this album was until about 5 seconds ago but who cares! Let’s get into it!

Believe it or not… as a straight 18-year-old female, Rupaul’s Drag Race is one of my favorite shows in the world, and my family and I watch it ALLL the time.

Trixie grew up in Wisconson and writes Folk music. Her first two albums were nothing but folk and those were great but on Barbara, she took a different turn and ending up making Trixie Mattel music history!!

This album goes into a completely different direction and mixes 70s pop with classic 80s techno and also acoustics! The album starts off with the song Malabu which is full-on electric guitar and just this dance type song; something that has never been heard by Mattel before.

As the record continues, this is a recurring theme in songs like Girl Next Door and Jesse Jesse but is interrupted by a song that really needs its OWN paragraph!

We Got the Look may not be the best track lyrically on this album, but music-wise it is genius and moving. There is something about it that just makes you want to do the monkey and pull out your go-go boots;  it is just 100% 70’s beach rock! When I hear it I swear I can see the cast of Scooby-Doo being chased by a ghost! Once you hear it… you will know exactly what I mean!!  The backgrounds add such texture to the sound and it is really just a work of art.

Going back to the song Jesse Jesse for just a sec, it really felt like a strange twist on Jessie’s Girl by Rick Springfield. Like it doesn’t really have the same sound to it, but once I heard the chorus lyrics of “I could be Jesse’s girl” I just could not shake the feeling that it was some sort of redone newer girl version of that song.

For the ‘folkier’ songs, I really liked Stranger. This song really reminded me of some sort of lullaby that a mother would be singing to her child. The sound is so peaceful and dead ass just gorgeous.

Although I like pretty much all the songs on this record, I think that they could have been arranged a little better. Like I have mentioned, Mattel is known for her Country/Folk roots and that starts back up again on the 5th track and from there, it is all folk.

This is fine but I really wish that the classic Trixie sound would have intertwined better with the new types and styles she is using in her other songs.

Overall, I think this is a really great album and was a HUGE milestone for Trixie Mattel.  I do really wish that the setlist would have been mixed up a little better due to the fact that you can feel the hard cut off of new sound and folk sound. All in all, I would give it a 4/5; all the songs were very well written and there were at least 2-3 that could bring a tear to your eye.