Design a site like this with WordPress.com
Get started
Skip to content
Izabella Zadra Reviews February 12, 2020 2 Minutes 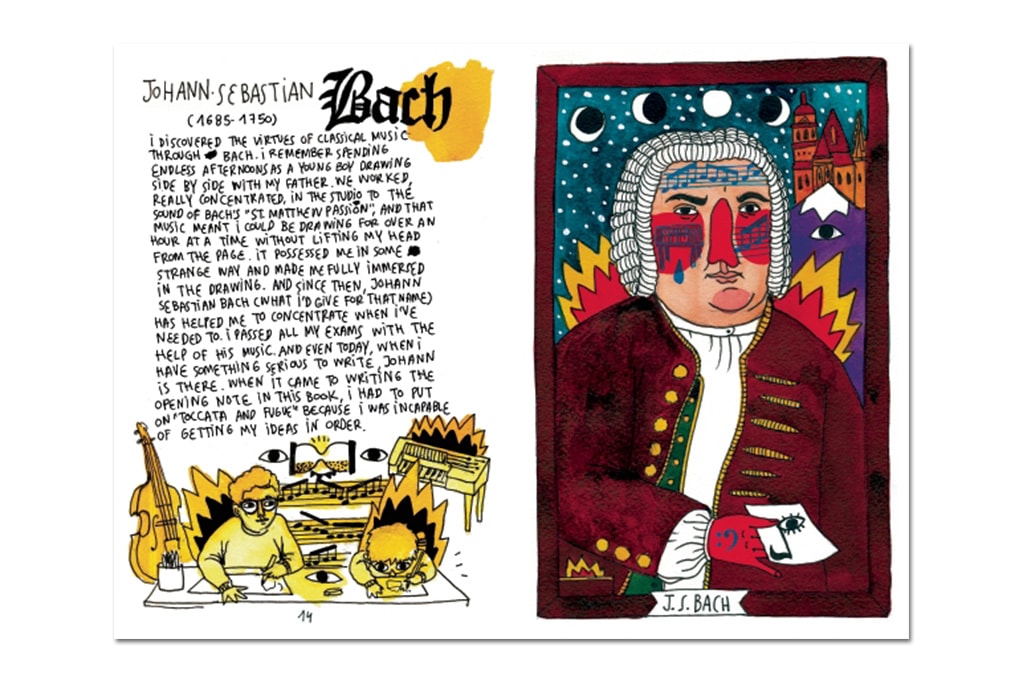 I was never a huge classical music fan but as I got a little older in my high school years I really started to like it because we were playing a lot of GOOD classical music in band and I started to explore. Seeing Bach be the first person in this book was a little shocking cuz from just browsing, this dude seems like a hard core badass and then he is like ‘Bach Rules’ and it caught me off garde.

Ricardo Cavolo talks about how as a child him and his father would be spending time in a studio with Bach playing and he could draw for hours and hours on end without looking up from his page due to his hardcore focus on the music. He says even when writing the cover letter of this book he put in “Toccata and Fugue” because I was incapable of getting my ideas in order”( Cavolo).

Bach is just a classic guy for musicians everywhere and taking the time to just sit down, do my work and take in his pieces was a real treasure. Now being a drummer, naturally I wanted more drum but other than that the compositions of his pieces are brilliant.

Bach’s music is like a really well crafted mixtape; it rises and it falls and comes to a kick ass conclusion. In the classic tune Toccata and Fugue (look it up, I know you know it) the organ in the first thing we hear and it is getting us hyped up, like maybe Don’t Stop Believing by Journey.

Then the song starts to get chaotic, a Talking Heads song perhaps then finally we are the part in the song where things tend to take a turn, where we take a moment to breath and reflect; U2’s With or Without You.

The end is here and we hear that hard core organ again and the chaos is mixed in there and there is a suspenseful ending…THAT BURNS DOWN THE HOUSE!! This could be compared to 1999 by Prince or if your a white person Sweet Caroline.

Bach was very good at using his skills to craft some of the most peaceful pieces of music and some of the most metal organ pieces that this world has ever seen. I really enjoyed exploring this world of Classical music as I don’t go out of my way to just listen to some Bach.

Of course! He is a classic composer that changed music for the good and really knows how to get people going with angry organ chords!