Design a site like this with WordPress.com
Get started
Skip to content
Izabella Zadra Movie Reviews, Reviews November 10, 2019 4 Minutes

Once Upon a Time in Hollywood 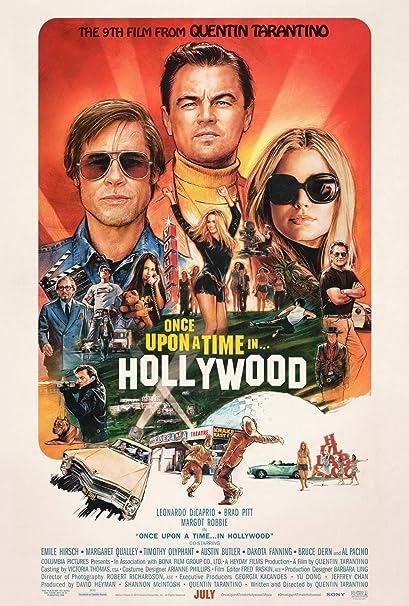 I normally do not write this but this post contains some MASSIVE MASSIVE SPOILERS. I thought about how I could write this without spoilers but that just wasn’t gonna happen with this post. So…you were warned. Continue reading if you dare.

If you are unaware of the plot for this movie, an actor, Rick(Leonardo DiCaprio) and his stunt double, Cliff (Brad Pitt) end up getting mixed up with drugs and the Manson family. When the teasers first dropped I almost exploded. I am so fascinated by the whole Manson Family and Manson murders thing so knowing there was a fictional movie coming out about the topic was pretty exciting. To take a case I am WAY to familiar with and creating a whole new story about it is pretty cool. So anyway ya these two guys end up getting caught up with the Manson family and ironically are neighbors with Sharron Tate. Get the idea; okay lets go on.

This movie was 2 hours and 40 minutes long which was way way way way too long. Literally the first hour and 45 minutes was so slow and so dry. And the thing that makes this even worst is that all that was just fluff. Yes there were a few things you needed to know but it could have been condensed to 30-45 minutes at most. That hour and 45 minutes didn’t benefit anything. If you read my Joker review, I talked about how the start was a little slow but everything was there for a reason and ended up making scene and improving the outcome of the movie but that was not the case here. It was just a whole ton of nothing which was a huge disappointment.

Now although the first hour and 45 minutes was pretty dull, once they finally meet the family and stuff, things start to get going!! Cliff is the one who starts falling for one of the Manson girls but soon realizes that she is up to no good and neither is anyone out on Spahn ranch.  So ya things really start to get interesting and a story is actually starting to develop which was really nice. From this part to the end was actually one of my favorite piece in Cinema I have seen all year! They way that the story built from this moment one was just jaw dropping to me!

Drawing away from the plot for just a moment, the editing and I guess what you could call  special effects were just dumb and very inconstant. An example of this was at the beginning of the movie there was nobody narrating the story then about an hour in out of FREAKING nowhere Kurt Russel starts to narrate the story. Like it was just so weird and sudden and felt very forced like ‘Hey Mr. Tarantino,  we lost the narration for the first hour maybe hour and a half, what do you want us to do?’ ‘Hm, maybe just start it riiiiiiiight THERE! Ya I think it will be okay.’ It was just really strange I thought.

Now going back to the plot and the spoilers I know all you guys have been waiting for. Once things started to get going they just didn’t stop. So as you  know, the Manson family was told to kill anybody who was living in the Tate household no matter who they were and you also know the horrible horrible outcome of this event. Going into this movie that was actually one of my biggest questions, how is the ending gonna be since we all know how it ends. WELL then I got a punch right to my face! As the family goes to the Tate house, a drunk Cliff catches them in the act because they were being too loud in front of his house. The members decided to rebel and go kill Cliff and Rick. Again, I was like everyone is gonna die and it gonna be done BUT THATS NOT WHAT HAPPENED!! The reason I loved this movie was because this amazing ending and maybe one of the greatest endings in film history. Cliff and Rick killed all three of the member…therefor they never killed Sharon Tate, her baby and the people living in the house!! BHJDGHJSDHJDGKJFFDHHFHF (this is the sound of yours and my mind blowing into a thousand pieces). It hit so different and was almost sad when I watched this and just thought “What if?” ya know? This was just a classic Tarantino moment because it made you question everything around you. The actress of Sharon Tate came out and talked to Rick about how scary this was and just the look on her face was just….a lot to take in.

Overall, I am not super sure how I feel about this movie. There was so much crap that just didn’t mean anything and was just there to make a 3 hour movie but the ending was one of the greatest things I have ever seen; I would give the WHOLE movie a 5/10 but I would give the last hour and a half a 10/10 no question. Sorry again for the spoilers but because the ending just had this hard impact that just made you think about this event in a whole different light, I just needed to talk about it and I hope you understand why.