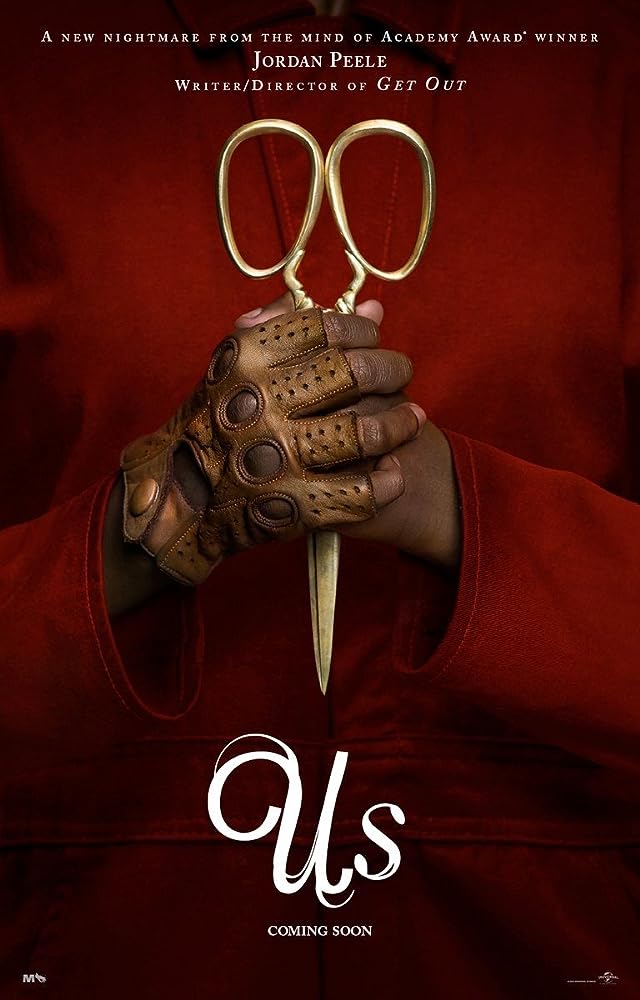 Yes yes I know I am a week late but last week there was nothing out I wanted to see and I knew I was going to see this movie this week so I just thought I would make you guys sweat and just write two entries for the 52 week movie challenge in one week!
So…. Us. I was so excited for this movie cuz it looked so freaking good from the commercials- but just like the movie Greta, it was not as good as I wanted it to be. I think I was so excited for this movie because I love Jordan Peele’s work in comedy but I absolutely hated his movie Get Out. I thought Us looked a lot better than Get Out and thought I would give it a chance. Lets just say, it was a lot better than Get Out but it could have been better.
Us is about a family who goes on vacation and end up running into the evil versions of themselves not knowing that the rest of the world is also being tormented by their evil selves. I think that it definitely had a better plot line than Get Out had, but could have definitely been pushed farther.
This movie wasn’t all bad; the acting blew me away! Lupita Nyong’o, Adelaide, gave such an amazing performance. From the second she showed up on screen I was frightened and intrigued by her facial expressions.She was so into her character and I don’t think anyone else could have filled this role. Winston Duke, Gabe, did an amazing job at playing his part as well. Although all this super weird stuff was going on, he somehow brought a sense of comic relief in some areas. I was really happy to see the work that was put into the acting.
The filming itself was absolutely amazing too. There is a part where one lady is writing on a chalkboard and another lady is standing about 3 feet behind her and it was gorgeous!! You had a close up of the woman by the chalkboard and then a far view of the woman in the back. Being able to see both expressions on both faces in this cool clip was awesome!
Overall I would give this movie maybe about a 5/10. The plotline was way better than Get Out, but was not great; the acting was amazing and the filming itself was pretty awesome. It was more funny than scary, but it didn’t cross the line of becoming a comedy so that was a little strange I thought. Also the last 15 min was like a crazy acid trip that was very hard to follow which I wasn’t a huge fan of. Go check it out if you liked Get Out or even if you just like Jordan Peele, but if you are looking to be scared this movie will not fill that need. It might make you a little uncomfortable but will not scare the crap out of you.

2 thoughts on “Week 11: a movie that came out this month”