Design a site like this with WordPress.com
Get started
Skip to content
Izabella Zadra 52 Week Movie Challenge 2019 February 6, 2019 2 Minutes

Some Kind of Wonderful 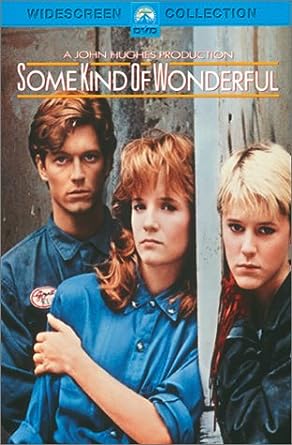 I mysteriously got this movie in the mail one day about 4 months ago from Amazon. It was a gift that my Aunt sent me and Lord does she know me well. An 80s movie about love and a girl drummer, I am a sucker for all those things. But this movie is known for having one of the greatest love triangles of all time so it really fit this weeks theme. I guess I didn’t realize that this was work of  John Hughes who has done such classics as ‘Breakfast Club, ‘Sixteen candles‘ and pretty much every other incredibly icon 80s movie. The whole story follows a high schooler named Keith who works at a gas station, loves to paint and hangs out with girl drummer, Watts. Him and Watts have been best friends since elementary school. Watts has liked Keith for a long time but Keith has no idea and instead tries to get the attention of the schools most popular girl, Amanda Jones. Throughout the movie Keith is trying to get his girl and Watts is trying to get her guy and everyone seems to just keep getting hurt.

I loved the whole concept of the movie and how things are not always what they seem. Watts is this character that shows little emotion and is nothing close to a romantic, but as the movie continues her emotions toward Keith tend to grow. This obviously throws keith off guard because even after all these years he doesn’t know what Watt’s feelings really look like. Amanda is also not what she seems. At the beginning she is very nice to Keith and says yes to a date when she acually is just trying to get back her boyfriend. She sees Keith as someone she could love but knows its not meant to be.

The cast really made this movie too. Lea Thompson(Amanda Jones) had this popular girl look to her. She looked like she could start a rumor about the band kids and get away with it. She looked like she was head cheerleader and was feared by the rest of the girls in high school. Eric Stoltz (Keith) gave the complete opposite of Thompson and that really pushed the whole plot of the story.  Two completely different people trying to make it work. Mary Stuart Masterson (Watts) no doubt put on the best performance. When she is in the car waiting for Keith and Amanda at the art museum, she isn’t crying, she isn’t yelling, she is kinda just staring in the distance. BUT AS A VIEWER YOU KNOW WHAT SHE IS THINKING AND YOU CAN FEEL EVERYTHING SHE IS FEELING!!! Masterson has that look where she doesn’t have to say anything but you know what she wants you to feel.

Overall, this movie was pretty good. It definitely was a cheesy 80s movie, but this plot strayed away from the norms that were part of movies back then. I would give this movie an 8/10. Did this movie make me choke up? Maybe, maybe not. I would watch it again and would recommend it to people especially who are in their high school years. Every clique is shown somewhere in this movie and this cenatio is something that I have for sure seen in a high school setting. So teens, go and watch this movie!! It relates to you so much in your life right now! This movies makes Twilight look like freaking Nacho Libre!

One thought on “Week 5: A movie with a love triangle”